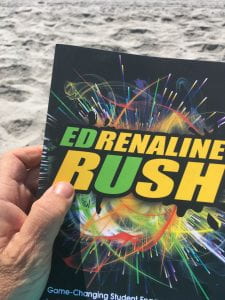 One of my favorite things to do in the summer is read on the beach.  When that reading transforms my thinking or my practice of teaching I feel doubly gifted. Edrenaline Rush by John Meehan is one such book.

This may end up being a series as there are just so many great ideas in this book. John Meehan also writes a blog that has fabulous ideas click the link to bring it to the blog  John Meehan

John is a Disney enthusiast and he uses some of the concepts of Walt Disney to promote excitement in his classroom. He highlights that ” We don’t teach content. We use course content to teach people.”

I am working with students in the Extended School Year (ESY). These are students that need extra support and ones that I wanted to make sure they enjoyed their time.

John Meehan’s blog talks about creating energy and a sense of adventure about learning using ‘games’. I loved this idea about Legos. Some of the teachers I work with have Legos as a break time activity and talk often about how excited the students are. How could I use Legos as an instructional tool rather than a break?  John’s blog talked about the thrill of using Blind Bags to create a mystery to entice the learner. I am hooked and a little bit obsessed now (I think it is now part of every Amazon order I make!). 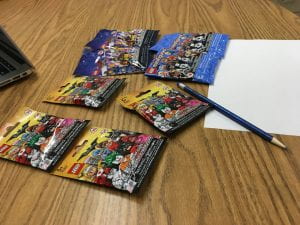 The first students I tried it with are students that have difficulty writing and have problems even in starting the process. When I introduced these mini bags and gave the task that we were going to write a comic book the summer about the character that they picked they dived right in. I had bought a variety of different types ( Batman, Disney, Lego Movies).

The students were very excited about their stories and also enjoyed listening to peers stories. The students would write using a whiteboard and I transcribed it to a google slide presentation. Writing on the whiteboard gave them the hand to brain connection while seeing it transformed into a story gave them the continuity of the narrative. These were students that usually teachers would report spent a half-hour with little progress and instead were greeting me with ideas for what they were writing next! 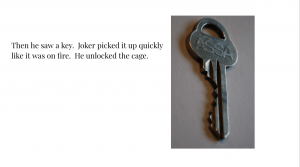 The next student I used it with was a speech student who needed practice and the use of a pacing board to facilitate a slowing down of his speech. This is hard for students as it requires a great deal of repetition to change a habit. You can see from the line-up of Lego characters that it became fun. 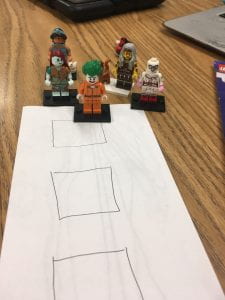 The last group I used it with were graduate students taking a class in Speech and Language Disorders for their masters in special education. If I thought that the young children enjoyed the Lego Mystery the adults were even more excited. It also allowed me to see them in action and look at their learning style.

The task that was assigned was for them to tell a story about their character and their partner would take dictation and then make an analysis of the language sample.

One student needed to know the exact name of her character and the back story. One student was so excited she had enough material to write a book, not just the assigned limit. I was glad to be able to have this project-based learning to solidify some of the problems that can come up in doing a language sample and some simple tools that teachers can use to evaluate their student’s language.

How do I know that the lessons gained in this task ‘stuck’?  One of the major projects for this class was to design a read aloud unit and a student used the mystery lego as part of her warm-up exercise! 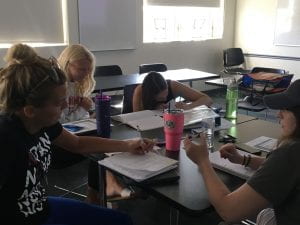 I highly recommend Edrenaline Rush by John Meehan, it is a read that you will be constantly referring back to and finding even more ways to incorporate the excitement of learning into the classroom.

Although I think I am totally hooked on purchasing these Lego mini-figures I am also storing them in little envelopes so that I can always make the surprise fresh for the students. I am thinking that once a month I will have a reward or a party reveal for a new figure.