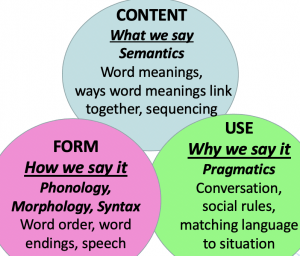 The concept of language is a difficult one. According to Bloom and Lahey, language can be defined as “a knowledge of a code for representing ideas about the world through a conventional system of arbitrary signals for communication”. Language is hard to describe but if you think about it in three categories it is helpful.

Phonology:  This is the sound level of language.  Children may have a number of difficulties as the sound level. It could be an articulation difficulty, a phonological disorder, or apraxia. 40% of children with ASD are non-verbal.  Some people with ASD have motor difficulties especially in motor planning and sequencing combined by their difficulty in imitation.

Semantics:  What does the vocabulary word mean. Example: A child could be called a child, kid, boy, girl, son, daughter.

Morphology: this talks about the structure of words such as word ending /s/ to indicate plural or ing to indicate tense. Research has that children with autism develop morphology skills unevenly and in a different sequence than neurotypicals. Research also indicates that it is better to teach morphology in a similar way to teaching it to neurotypicals rather than in a rote.

Syntax: This is grammar, or the rules for using words, phrases, clauses and punctuation, specifically to form sentences.  Correct syntax examples include word choice, matching number and tense, and placing words and phrases in the right order.

Pragmatics: This is the skill that helps us use language, knowing what to say, how to say it and to whom you should say it to and when to say it. It is how we communicate with each other including body language, eye contact, proximity and tone of voice. It is understanding the hidden curriculum or the hidden rules of social language. One boy in middle school was getting into trouble because he refused to write a narrative essay. He told the teacher he did not understand that if he had it in his head why he would need to put it on paper. This lack of understanding of the expectation of school is a problem of pragmatics ( student is bright and has the grammar and the vocabulary and the skills to do the work but not the social skills to complete the task).