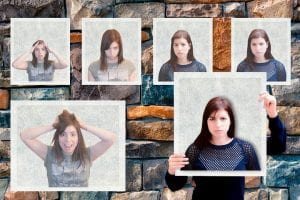 Not all of our communication is verbal. When we examine a child’s speech and language skills we need to include observations and descriptions of how the child is communicating non-verbally.

Eye Gaze: A child might look at something they want and then back to the caregiver to communicate this want.

This is often missing in students with autism spectrum disorder and it is this joint attention skill that we so often want to cultivate to give the child a way to deliver a message.

Facial Expressions: Children begin to understand the differences in facial expressions unfortunately child with ASD may not. There are some students that actually may prefer the face of someone who is angry. One teacher had a student that would purposefully do something wrong to get her teacher to make the ‘ mad face’. This then was shaped so that the child could earn the ‘mad face’ in a game rather than as a consequence of a behavior. ( the child thought that the teacher looked funny when she was mad)

Proximity –  understanding of gaze shifting, distal gestures, facial expressions, and rules of proximity and body language are all things that we use to communicate. When we begin a conversation with a person we get closer to them. If we are interested in a toy you move toward it.

Volume: Students with ASD may have difficulty regulating their volume and not match the tone and volume to the circumstance. They may think your voice is ‘yelling’ yet when they are screaming may say they are just ‘talking’.

Unconventional – behaviors such as a tantrum can be used to signal a message. A child wants candy and because they don’t get the candy they scream and cry. They have communicated that what they wanted to happen have not.

Although we often think about this with young children it is also a skill that older students with social communication difficulties need practice with. Often the student with autism spectrum disorder (ASD) does not ‘read the room’ and will not see that the teacher is becoming angry with the noise level in the classroom and they will be the last to quiet down and therefore the one that gets in trouble.

I have a student whose speech volume is so loud that his message is misinterpreted by the listeners. They meet his communication attempts most often with an admonishment to ‘be quiet’.

Another student in his attempt to befriend a peer is having difficulty maintaining personal space. Although the peer enjoys the student, his difficulty with proximity begins to compromise this budding friendship or as he says it ” it is getting annoying that he is always sitting next to me”.