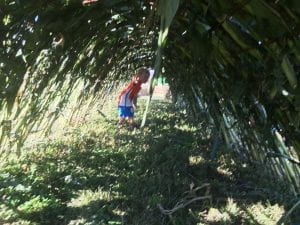 I had always thought about trying to do a Tough Mudder. The thought of joining a group of adventurous people all striving for the same goal intrigued me. This Saturday I took my grandson to the local farm for their Harvest Fest. As part of this, they had a child’s size corn maze.  As Brock is just three I thought I should accompany him through this maze which was made up of hay bales with a couple of obstacles. When I realized that child-size also meant that I would need to crawl through these I began to doubt my abilities. Brock cheered me on saying ” I’ll hold your hand nana”. I made it!

That is how I feel about the beginning of the school year. The obstacles in front of us seem like there is no way that we will be able to ‘crawl’ through them but with some helping hands, we make it!
Kindergarten speech and language screenings are part of the educational requirement. I typically do these the first week of school giving me a chance to meet each of the new students. Many states have a requirement that new students are screened. The purpose of the screening is to pick up any student that might have a speech and language problem so that we can intervene early with these students before there is a major problem.

The screen itself is simple and takes very little time something important when there are so many students to screen however the information that I gather is invaluable.  It allows you to have a glimpse into the children’s learning style as well as their speech and language skills. It is meant to be the first data point for those students that have not been previously identified as having needs.

Included in this product is:

This is a GOOGLE DOC so you are able to make a copy and edit it according to your needs. The tool is free!