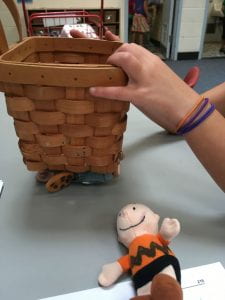 Put the mouse under the basket

Kindergarten speech and language screenings are part of the educational requirement. I typically do these the first week of school giving me a chance to meet each of the new students. The purpose of the screening is to pick up any student that might have a speech and language problem so that we can intervene early with these students before there is a major problem.

The screen itself is simple and takes very little time which when screening close to 90 students is important however the information that I gather is invaluable.  It allows me to have a glimpse into the children’s learning style as well as their speech and language skills. It is meant to be the first data point for those students that have not been previously identified as having needs.

I am introduced to the class as “Queen Rakovic” a character that I adopted many years ago when I was working with several classes to write a fiction book. This appears to relax the students who have just gotten to know their teacher and the routine of the classroom and now another adult is going to be asking them questions.

The first part of the screen is an articulation screen and some children are thrilled that they are able to repeat the words that I am asking them nearly looking for a jumping high five. I also know some of the slang that might be used in families as they become nearly hysterical when I ask them to repeat the word ‘toot’.

The children are asked to touch a variety of body parts and it is interesting to see how they accomplish this. Some children easily take their hand and follow the simple one-step directions while others have it more of a yoga challenge trying to keep one hand on the last direction while attempting to add the next (ex. “Touch your head.” ” Touch your arm”). Again I have the pleasure of witnessing their delight as they figure out how to follow the direction “Touch your hand” .

Then there are a series of simple associations: ” A brother is a boy a sister is a _______” . I hear about the fact that they have no sisters, or that there are 8 in the family or as one boy stated: “is a pain”. The other two questions sometimes stump students initially. This is where I see some of their persistence or ability to take a moment and think. The errors made on these questions are usually a child not initially being able to come up with an answer and saying “I don’t know.”  However when I say “Let’s think about it” and then I am quiet for a minute the students often are able to come up with the correct answer. One student however in answering ” The sun shines in the morning the moon shines at ________” told me 7:30. I tried to probe some more to have her say “night” and the budding meteorologist gave me a lecture on the changing sunrise and sunset times.

The students then are asked to follow some simple one-step directions with a positional word using a stuffed animal. One of the directions asks the child to put the stuffed animal under the basket. Several of the students related to me that this was not possible. Again when I said let’s try to figure out how to do it they were able to problem solve it. To me, this reinforces our need to set up some simple obstacle tasks, STEM activities and basic exploring tasks to help a child see that you can figure things out that might seem at first glance difficult to accomplish.

I have the best job!