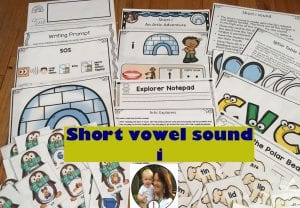 “It is paradoxical that many educators and parents still differentiate between a time for learning and a time for play without seeing the vital connection between them.” -Leo F. Buscaglia

What do you remember about school?  Was it the scores on your state tests ( did you have these, I know I did not until I was graduating from high school) or was it the fun project that your teacher did.

I have a student that was struggling with the short vowel sound /i/. He could say the word card with the keyword, sound and letter name but when he saw it in a word he confused it.

What finally made the turn around was our Arctic Adventure.

I love setting up the environment whether it is wearing something different or having different tools to use, I think that the novelty assists the students.  For this task, I had several items out. (I have put some Amazon affiliate links in for your convenience but you don’t necessarily need to use the exact tools I used).

• After reviewing the short ‘i’ sound with the previous picture card and oral practice, tell the students that they are going to be Arctic Explorers. They are going to go around the room with their magnifying glasses.

Have the child look at the words and tell you what they notice.

• Tell the student to write in their explorer note page the word. Tell them to write C on the letters that are consonants and V on the letters that are vowels. Ask them what they notice. You want them to have at least three words so they can see the pattern. You want to explain that these are closed syllable because the consonant closes off the vowel and only lets it talk with it’s short sound.

• After the student does this practice have them find some other penguins or trade with their neighbor and use their magnifying glass to determine if it follows the same pattern.

• After the discovery, show them the picture of CVC and use this to reinforce that ‘i’ says it’s short vowel sound when it is in a closed syllable.

• Set up igloo ( picture on next slide) as first a tabletop with a set of cards with the short i sound. Have him put words with short i in the igloo. Have him say “The ____ is in the igloo.”

•You can put the igloo as just the picture but it is fun to put it on a tissue box, bowl or other item that will allow the student to actually put the card ‘in’ which is also has a short i sound. • Some CVC words have two meanings and some of those are represented in the vocabulary cards, so for example kit ( box of something) and kit ( a baby fox). Working on sounds is also a great time to work on developing vocabulary. Some of these CVC words are not common words and it is important for the student to not only decode but also know the meaning of the words to aid in their reading. Use the penguins for this tabletop activity.

• Set up an igloo/tent using a sheet or a tablecloth from the dollar store. It can be as simple as putting a sheet across two chairs or bookcases or putting a sheet over a child’s tent. It is more the idea of the igloo and a different environment that the child can experience the short ‘i’ sound. 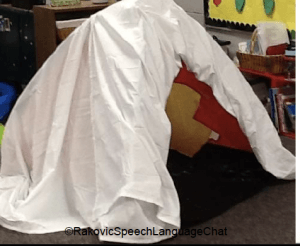 • Tell the students that now we need to rescue some Polar Bears.

• We will use SOS simultaneous oral spelling. There is a poster that has this strategy that can be used as a visual for the student.

If you want the visuals that go with the lesson I have it in my TPT store: Short i Arctic Adventure

Having fun helps in the learning process, take an Arctic Adventure.