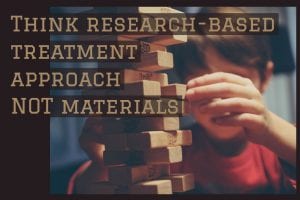 When we are writing about a child’s progress it is very important to discuss the research-based approach that we are using. This assists the reader in understanding the essential components that are needed.

Sometimes there is confusion between ‘materials’ and the research that assisted the developer of the materials. This becomes especially cloudy when you are using ‘therapy material’. It is easier to understand that Jenga is not the research-based approach you are using to teach pragmatic skills but it may be harder for the beginning clinician to recognize that Scholastic’s Text Talk is not the research-based approach. Rather the developers of Scholastic’s Text Talk” Beck and McKeown have taken the research and best practices to develop this material. Therefore what should be discussed is the research on the development of vocabulary first and then say that the material was used because it met the critical analysis of the research features.

Use the American Speech and Language Association (ASHA) website to find the research-based approaches for speech and language disabilities.

Sometimes it is good to see a model of how a fellow clinician has written this section. Here are some examples of treatment approaches: note that the child’s name has been changed to protect their privacy.

The Hybrid Approach is an evidenced-based treatment approach that is used to increase language skills in a natural way. The clinician develops activities that are play-based and natural, while also allowing opportunities for the child to spontaneously produce utterances containing target language forms. This approach consists of three key characteristics – targeting a small set of goals, maintaining control by selecting activities and materials that will tempt the child to produce spontaneous utterances using target forms and using linguistic stimuli to respond to the child while modeling the language forms being targeted.

A modified Hodson Cycles Approach was used this semester to address gliding phonological errors as it had been successful in past semesters. Hodson Cycles Approach is a linguistic evidence-based approach designed for highly unintelligible children that targets phonological pattern errors. During a cycle, one or more phonological patterns are addressed. This semester targeted gliding of /r/ as assessment results indicated that /r/ in the initial position was highly inaccurate and the skill was not maintained from the previous semester. Each session began with a clinician model of the target sounds in words and phrases. When the clinician provided the model, Piglet was asked to pantomime the production and think about the necessary articulatory gestures to produce the target. Peter was then prompted to produce each target word and phrase a total of five times each. Sessions were designed to elicit as many accurate productions as possible to reinforce accurate articulation.

Walter’s articulation abilities were addressed by first evaluating his production of the phoneme /r/. The phoneme /r/ is complex as it acts a vowel and consonant. Depending on the neighboring sounds, production of /r/ can vary which can be difficult to master. The Entire World of R Approach was chosen as it is an evidence-based treatment approach designed to evaluate and treat /r/ phonetically. The theory behind this approach is that therapy starts with successful productions which are used to treat unsuccessful productions. The treatment breaks down the phoneme /r/ into 21 variations and word positions (initial, medial, and final) and determines the variation that the child is most stimulable for. The intervention target from this approach is based on the production of /r/ that is closest to 80% accuracy. The Entire World of R Approach focuses on one target sound and word position (initial, medial, or final) at a time. The THR blend was the chosen target sound for this semester based on results from the screener.

Narrative development such as literacy is a critical skill for a child’s academic and social success. There is a strong connection between oral language and written language in which there is a progression of discourse from conversation, narration to exposition (Moreau, 2010).

The Story Grammar Marker is a tool that represents narrative structure. The evidence-based research behind this approach is that narration links literacy, critical thinking/ discourse skills, and comprehension. Children with language delays have difficulty with language comprehension and expression. Utilizing the Story Grammar Marker Tool requires students to identify significant ideas, sequence story details, and retain information by relating components. The narrative elements included in Story Grammar Marker are the character, setting, feelings, kick- off, plan, attempts, direct consequence, and a resolution. Story Grammar graphic organizers were additionally used to target Chris’s ability to provide factual details from the setting of a story. Based on Chris’s instructional reading level, Level I books from Reading A- Z were used in conjunction with Story Grammar Marker.

Idioms are a type of figurative language, in which children with language disorders often have difficulty comprehending and using them. Idioms are often verbally expressed, however, can be in a written form of language. Idioms are commonly found in everyday speech, movies, magazines, and books. Children with language disorders have difficulty with this type of figurative language as their underdeveloped reading skills translate the expression to its literal meaning rather than the figurative meaning (Nippold, 1991).

In order to enhance idiom comprehension, research has indicated that this type of figurative language learning is a complex process that involves repeated exposure through written or spoken contexts. A child’s listening and reading skills will also depend on their ability to comprehend unfamiliar idioms that are not directly taught. Since comprehension of figurative language is a complex process, the treatment approach incorporated written, spoken and visual elements of learning (Nippold, 1991). For each idiom taught, a supplemental video was shown to Chris which showed the figurative and literal meaning of the idiom. Once the definition was provided, Chris wrote the idiom, the definition and drew a picture of literal meaning. For homework, Chris would write a sentence containing the idiom which would be discussed in the next session. Repeated exposure of idioms was approached by utilizing an interactive game that required Chris to provide the literal meaning of targeted idioms.