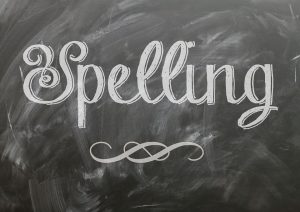 Okay, true confession, I am a terrible speller. I went to parochial school and we had weekly spelling bees and tests. I consistently was the first one out in the spelling bee. The nuns would try to teach me and I remember one of them proclaiming ” Even a parrot can learn to spell” as I failed another test. She was not all bad the next spelling bee she manipulated so that I won. I guess she was practicing reverse psychology and was remorseful after her outburst but frustrated in how to teach me.

Now, as a speech and language pathologist there are times that my students need my support to work on their spelling.

There is a developmental process to spelling. The preschooler might scribble and make some letters mostly the upper case in their writing, there is a lack of understanding of the conventions of spelling. By the age of five or six, you begin to have some understanding that letters represent phonemes however the child may write two letters to represent a whole word ( ex. dg to represent the word dog). By seven or eight, you begin to see more vowels in their spelling and they become more aware of the pattern of letters in words. Their spelling is becoming more conventional however there are still errors in words that don’t follow conventional rules. By eight or nine the child is spelling most words correctly and is understanding the rules of English orthographic system. They begin to see that some words don’t look right and will try to correct them.

The first step is an assessment. There is a need to establish a baseline and to evaluate the skills sets so that you can establish goals for intervention and then to also measure changes based on intervention.

There are several ways to evaluate spelling. You can do a dictation task in which the student needs to write words or sentences. You can make an analysis of a writing sample. Finally, you can have the student identify words spelled incorrectly which is a recognition task.

Some norm-referenced spelling assessments are:

An effective spelling program teaches spelling through the use of phonemic, whole word and morphemic instruction that includes direct instruction and supplemental research-based materials.

In choosing word lists there are several things you can do and some that you can do simultaneously. It is better to have flow lists rather than fixed lists as fixed lists seldom lead to mastery whereas flow lists are designed to work on error words.

The use of dictionaries assists those that are having spelling difficulties. It gives them some independence as the child looks up the correct spelling. The dictionary will provide information on syllabication, meaning, synonyms, and pronunciation. You can see how the child predicts how the word is spelled. It also can assist in teaching prefixes and suffixes.

Spelling City: There is both a free version and a paid version

Ed Helper: This is a paid site with fees for a year for basic at premium