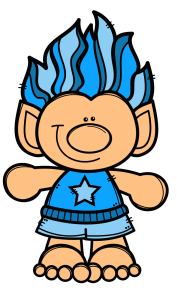 Growing up Troll dolls were a toy fad, with my classmates and I collecting them and rubbing their hair for good luck before a test at school. Troll dolls were first invented by Thomas Dam for his own children and then because they were popular he began to produce more.

The latest resurrection of Trolls is Dreamworks movie, Trolls.

The fun little guys then became the subject of one of my interactive books that I use at circle time. The children were excited to see something that looked familiar and it allowed me to reach them in a different way. When I introduced the book, Gonoodle was having a sneak peak of the movie so I used that as the priming activity.5 Trolls Went on a Stroll 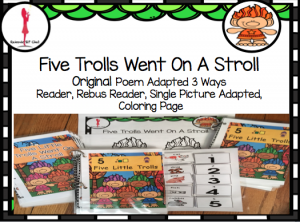 For this set of books, I have five colorful trolls going a stroll looking for a pet. To increase phonological awareness the story is written in rhyme. 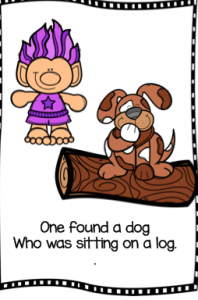 In the interactive edition, the child is asked to label the animals that are found as well as how many trolls are left. 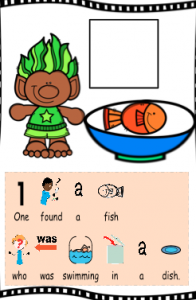 ♥ The first part is appropriate for those children that are readers or it can be read to the child.
♥ The second part has pictures and words in a rebus read
♥ The third part has both the rebus read as well as a place for single pictures
.

I find that I have a variety of students that I work with and having the same story in several different editions help to support all my students. I store them in a folder then give each child the edition that is appropriate for them.

I use this story for a variety of students from students
• Preschool, kindergarten, and first graders as part of a poem choice
• Fluency cases to practice smooth speech
• Beginner readers
• Students who need visual supports including students on the autism spectrum, students with attention deficit, students with cognitive difficulties, and students with speech or language difficulties.

I find that if I can be relevant to something that is happening in a child’s life they have a greater chance of remembering the concept that I am teaching or they are more willing to explore the materials.