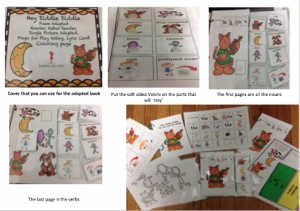 Mother Goose Rhymes introduce students to literature that has been passed down for generations. The rhymes assist the students in learning vocabulary and practice phonemic awareness. Learning these poems by heart assist in developing auditory memory skills.

In creating this support I wanted to design something that could be used by a wide variety of students.Hey Diddle Diddle on TPT

The first part is appropriate for those children that are readers or it can be read to the child. 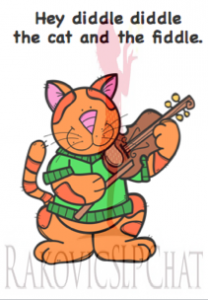 A rebus read is a great reader for an emergent reader as they are then able to partner read with you as they decipher the pictures to create the story.

Rebus reads helps the child know that print has meaning and how the print moves across the page from left to right.

The second part has a pictures and words in a rebus read.

To increase support, the next part has a picture that the child can match to the picture giving the child another way to connect with the text.

Label the pictures as the child puts them on encouraging them to repeat after you.

You can also begin to tell the difference between ‘nouns’ and ‘verbs’. For example, “Oh dog that is a name of a thing, it is a noun. Jump over that is an action that is a verb.”

The fourth part (RL.K.2) has two pages of pictures that can be used to act out the story and follow directions

The fifth part has a lyric single page

I find that I have a variety of students that I work with and having the same story in several different editions help to support all my students. I store them in a folder then give each child the edition that is appropriate for them.

I use this story for a variety of students from students
Preschool, kindergarten, and first graders as part of a poem choice
Fluency cases to practice smooth speech
Beginner readers