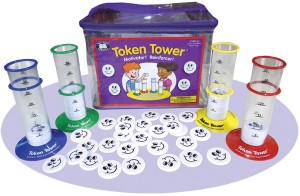 Super Duper Publications has a product Token Towers    (http://www.superduperinc.com/products/view.aspx?pid=chips22#.U6YPR41dUQQ) that I consistently use in my therapy sessions to visually reinforce my students. When they reach a particular mark they get a sticker for their chart and when the chart is filled they get a prize. A simple system but it allows me to clearly illustrate to the student expectations as well as I find that the students are very attentive to the lesson to get their tokens.

I used this is a different way recently with a first grader with autism spectrum disorders. This is a delightful child who is fully included at his grade level.  He has done well this year but there has been some minor bumps in the road. Two behaviors that kept cropping up were his inappropriate conversations with his peers ( You are a two year old, You are ugly) and his bathroom talk combined with pulling his shirt up. The behaviors usually occurred during high stress times where the schedule of the school was different ( holiday, testing, end of school year).

I had him come for an individual session and he and I wrote out a contract. I would give him a token tower and give the chips to his teacher. She would give him a chip for every nice comment or good interaction BUT she would take two chips out of the tower if he had any bathroom talk, stripping or inappropriate social interaction. We talked about what he could say. When he reached 30 tokens he could invite some friends and we would go outside for 15 minutes of play time.

The first day the teacher said that he earned and then lost some tokens. She reviewed with him some comments he could say. I then took him and another child to play a game. I spoke to the boys about how they were earning tokens for positive comments between them. The boy got it however he was repeating the same compliment over and over. I upped the cost of the token saying he had to say different sentences.  He did. What was even better however was that when the session ended he and the other boy carried on a conversation all the way back to class that was just precious. I asked the other child to tell the teacher if the boy said or did something nice. ( This class had taken to ‘tattling’ whenever the child made an error). Now I had a peer cheering on and supporting my student.

He earned an outside time and invited 3 boys to play soccer, making him very popular. When we went outside there was a group of 2nd graders playing a ‘kids rules’ soccer game. I was hesitant but let the boys join in and I watched but did not coach or interfere. There were times he was a little rule bound ( Hey the ball is out) but the peers corrected him ( Just play the ball).  On our way back to class the group was so excited. I explained that kids rules are sometimes different than team rules but that is okay.

I was so excited the student had a complete turn around ( I always feel that it is magical when something works so well).  The boy asked if he could have the token tower in 2nd grade and then went home and during his free time wrote a five page story about what happened.